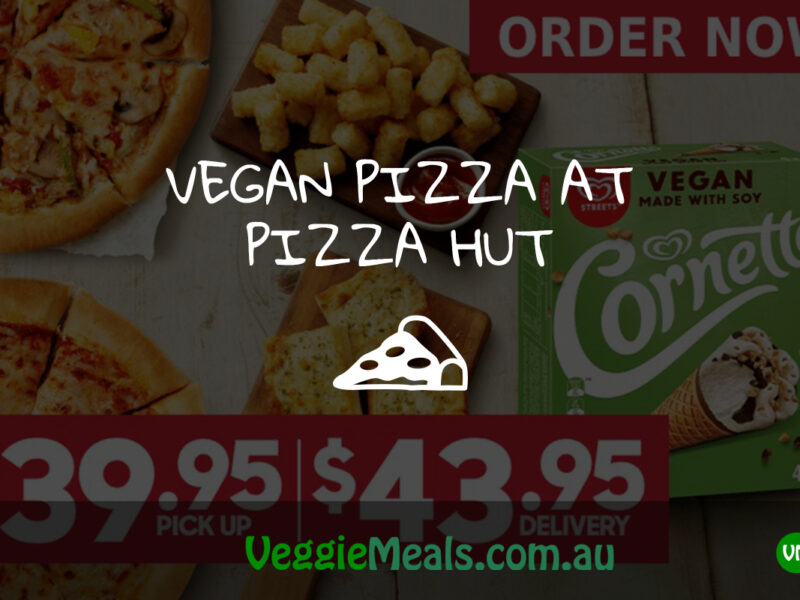 Pizza Hut has introduced vegan pizzas and plant-based pizzas to their menu. The Veggie Meals team had the opportunity to try out the Vegan Cheese Lovers Thin ‘N’ Crispy and the Vegan Deluxe Deep Pan + the Spud bites and we loved it. We really missed that authentic Pizza Hut taste, in particular, the sauce and crunchy base.

You can get these with a Deep Pan, Traditional or Thin ‘N’ Crispy base. Unfortunately, they don’t have a gluten-free base as pointed out by one of our readers. We hope Pizza Hut can introduce this in the near future as there is a growing gluten-free community in Australia.

For the vegetarians, there are a few more options and these are:

When we picked up the pizzas, we saw the vegan promotion on the boards:

There is the option to order the vegan bundle offer which consists of 2 large vegan pizzas + 2 vegan sides + vegan cornetto for $39.95 for pickup or $43.95 for delivery. It’s a pretty good offer if you wanted some sides and dessert (we must have missed this offer when we ordered the vegan pizzas due to the excitement).

When we picked up the pizzas, we were delighted to see the staff at Pizza Hut using a different pizza cutter (they were cutting a meat one and then switched the cutter when they cut our vegan pizzas) and when we received the pizza boxes we saw a sticker on the box with “MADE WITH VEGAN CHEESE” which gave us a bit of confidence they took more care in preparing the pizza.

Overall, the Pizza Hut Vegan pizzas were delicious and there was definitely more vegan cheese on the pizzas compared to other pizzas we tried in the past. Here are a few photos of the pizzas:

Are we making you hungry? Try the Pizza Hut Vegan Pizzas now!